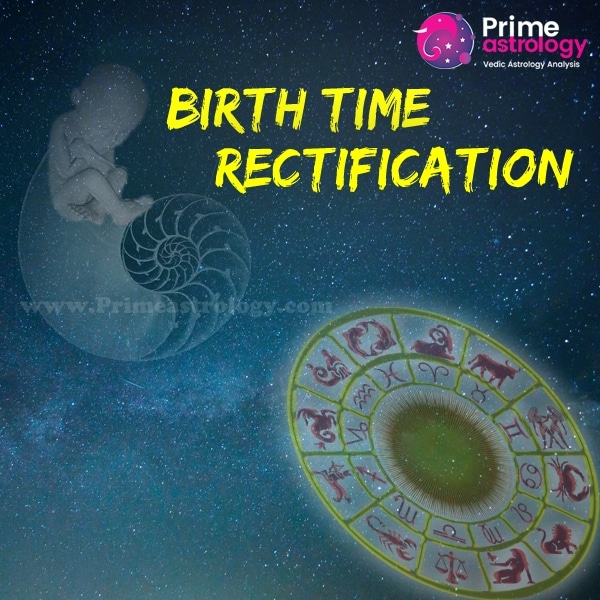 Here I am providing a model Birth time rectification method of a client that was performed by me. I am publishing the details after obtaining permission from my client. The name and place of birth were not published as per the request of my client. 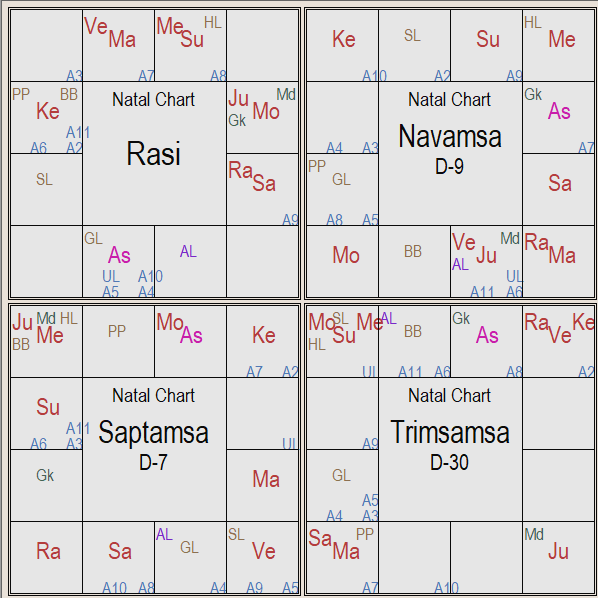 Facts told by him: 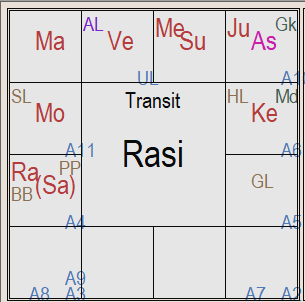 During Saturn Antardasa as Saturn is conjoined with Rahu you may be separated from your home town. It can happen (Hence confirmed)

8. He didn’t study hard even though he feels like he is intelligent 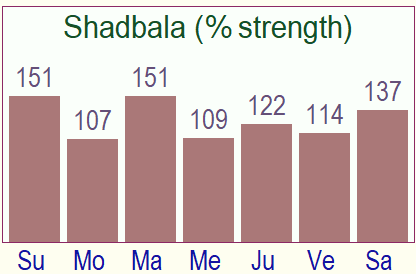 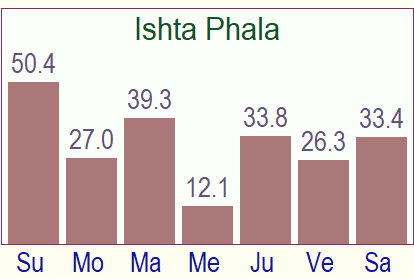 Mercury’s strength and Sun and Mars strength are more which is actually suitable to the native. Hence confirmed.

9. During Inter he studied Biology

Birth Jupiter was on Mars Decanate. Transit Jupiter was in Saturn’s decanate @01.07.1993 in an enemy sign. Mars and Venus combination suggests Biology. No surprise. Hence confirmed.

When Mars is in Lagna, Moon is in exaltation, Moon is also in Sun’s star Rohini, Sun is in Moon’s house Cancer. Lord of education Jupiter along with Venus in the eighth house of the native when Rahu is spoiling the cause of education the native was elected as president. Native completely came out of education stream as there is a Punarphoo dosha (Slow down education) also raised in transit @ 14.08.2001, 06:30 AM. Hence confirmed.

11. During Oct’2001 he was elected as president of Mandal sarpanches 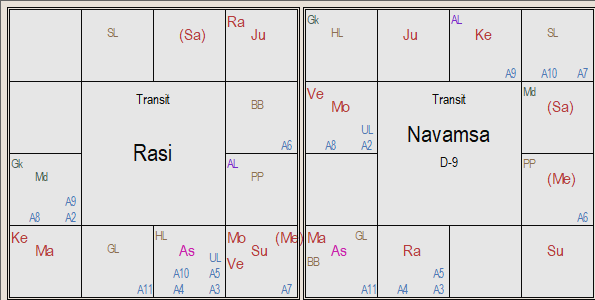 12. During 1997 he learned stick fighting (apr-may). He learned it very fast (During Ketu Mahadasa and Jupiter Antardasa. Mars association to Lagna and Ketu. Hence confirmed)

13. During 1996 in village quarrels his father got injured on the hand when the family suffered a lot (During Diwali-November 12, 1996)-Pitru karaka Sun, Matru Karaka Moon and love karaka Venus debilitated on this day and Mars is looking at the debilitated Moon in Transit hence confirmed)

14. During 1997 native was in the spiritual path (It happened during Ketu MD and Jupiter AD. Hence confirmed)

(Both the above points can be easily seen in Drigdasa. Native is in Aquarius MD and Aries and Virgo AD with a connection towards Mars (Lagna lord in D-1) and Venus (who is posited in Aries along with mars). Hence doubly confirmed)

16. During summer 2006 father was elected as MPP. It was a clean victory. Native played a good role in the victory. Father was the right hand of an MLA. (May, June) 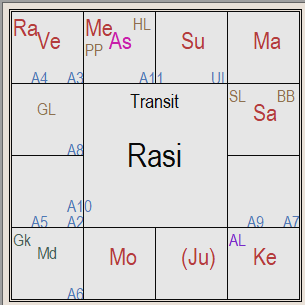 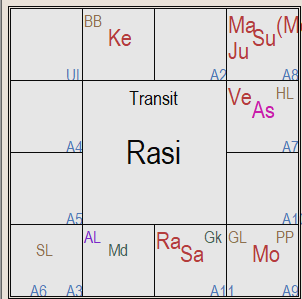 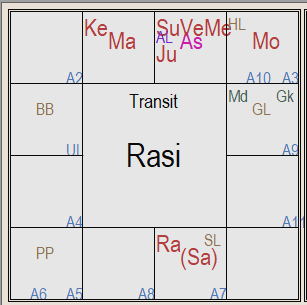 20. Local Sarpanchship was there in the family for 40 years

21. The native never did anything for the regular job but used to do contract works (Placement of Rahu and Saturn in the tenth house in D-1 confirms the same)

22. Taken a lot of debts however since 2018 he is doing real estate business where his earnings are good. Maximum debts are reduced. During the next 4 months, there is a lot of scope for earning money also. (@May3, 2018 the transit triggered the combination. Hence confirmed) 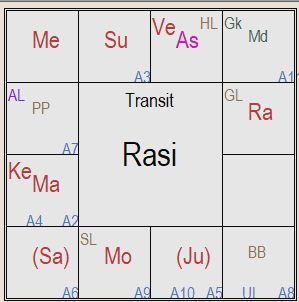 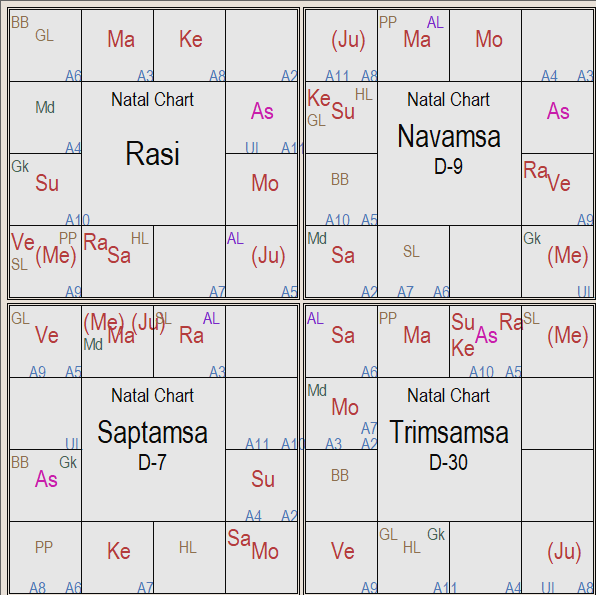 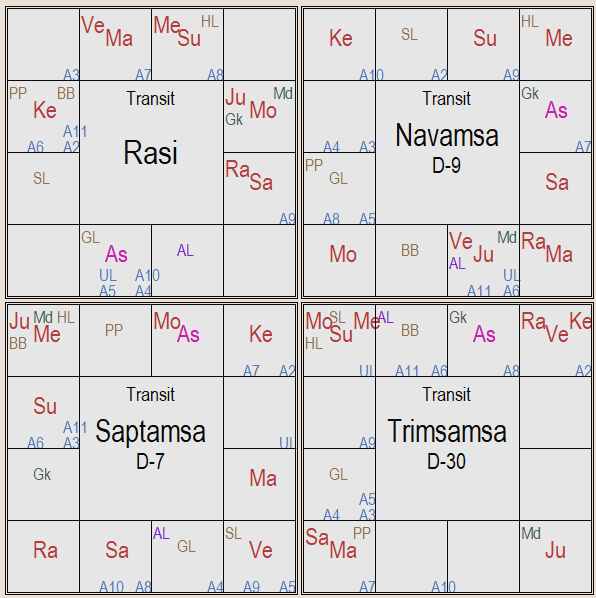 Looking at D-7 we can see that Lagna is Taurus and even sign. Hence, we need to count anti-zodiacally the 5th house and 7th house for two children. Native told that he has two male children. 1st male child can be confirmed by Saturn’s placement in Scorpio (lord Mars= Male sign) while exalted Moon is aspecting at it. 2nd male child can be confirmed by the lord of the 7th house placement in Leo while Lord of Leo Sun aspecting Mars. 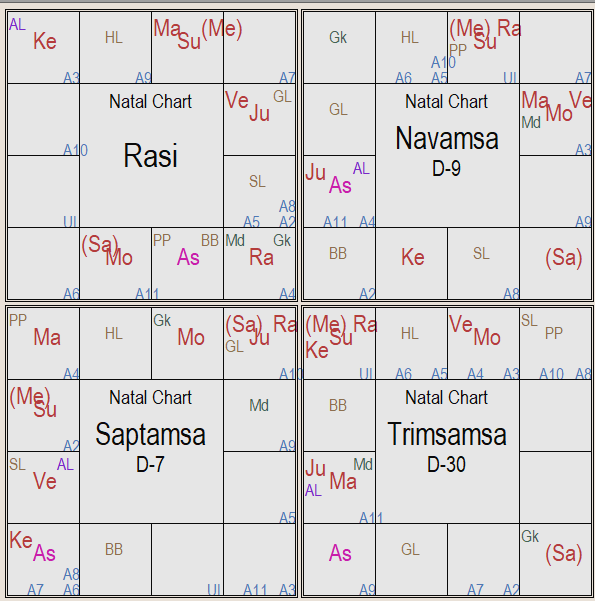 In D-7 Saturn’s placement is given here.

The child was given by the combined effort of Saturn (Putra karaka in D-7), Exalted Moon and Mars (who is the lord of house where Saturn is posited)

Native gave birth to the Male child during Venus Maha Dasa (Taurus where exalted Moon is placed in 14 degrees) and Saturn Antar Dasa while Saturn is placed in Mars Drekkana. Hence confirmed. Even the transit Moon is looking at the birth child lord.

If the lord of the sign is neither exalted/ debilitated, not conjoins any other planets, the sex of the child is seen from the nature of the sign occupied by it. The seventh house when we look anti-zodiacally in the Saptamsa is Scorpio and lord Mars is placed in Leo whose lord is male hence the birth of Male child can be predicted. Hence confirmed. Even in transit Mars @ time is placed in Leo in Mars Drekkana. Saturn being Putra karaka of that Lagna who is also posited in Scorpio as the occupant is aspecting the lord of the 7th house in D-7 hence through transit also can be confirmed.

The marriage occurred during Venus Mahadasa and Saturn Antardasa.

Venus is the significator of marriage and hence there is no doubt marriage might have occurred during his Mahadasa. However, to see Saturn’s Antardasa we need to see Navamsa (D-9) where we can see that Saturn being the 7th house lord is sitting in the 2nd from Lagna aspecting the Venus while Upapada Lagna is at Libra.

The same combination can also be seen in’ D-1 also. Where UL is in Scorpio lagna Saturn is looking at Taurus (Lord: Venus). Hence confirmed. 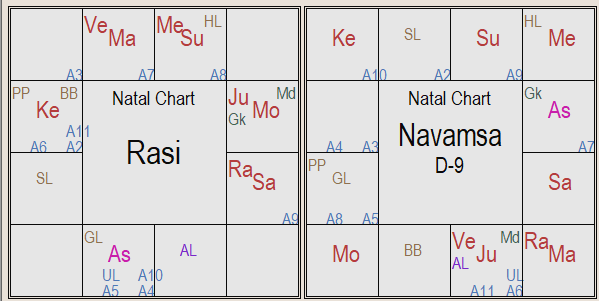 28. Native is enjoying a good married life till date (Not required for birth time rectification)

Influencing planet conjoining progress planet within a degree during Apr-May 1997. Hence confirmed. After confirming when I asked later he told that he purchased it during the same time only.

As it is confirmed the range of rectification is between +3minutes or -5.26minutes. 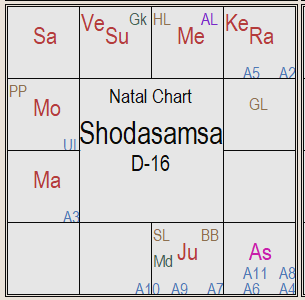 30. In 2004 January he purchased the first motorbike (Pulsar) 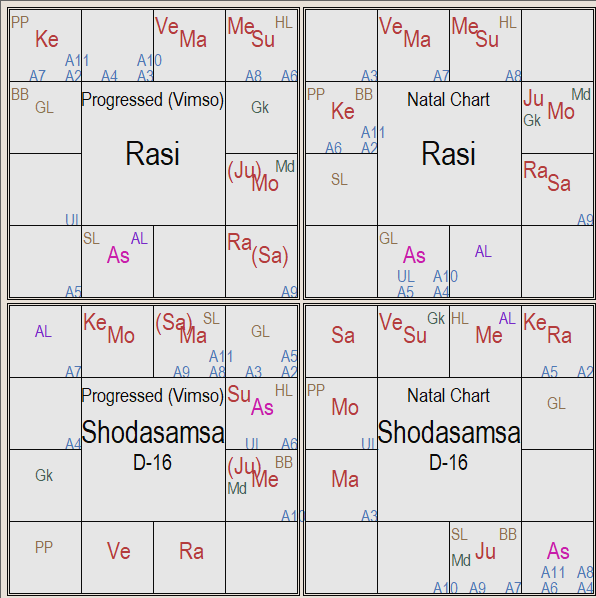 There are 2 combinations that triggered the event.

The 2 combinations are as follows:

There is no fourth house lord connection either in D-1 or D-16 hence significance can be taken only as a gain, not as ownership. Later on, this was confirmed by the native as he purchased bike in a friend’s name. 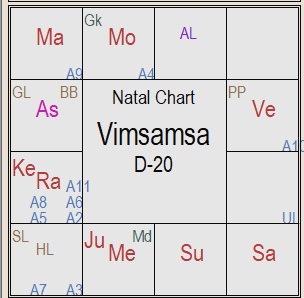 Second house of D-20 clearly shows the presence of Mars @27 Pi 22′ 04.28″ in the second house who is Atmakaraka in the house whose lord is Jupiter and Jupiter is in Scorpio whose lord is Mars. Hence, there is a Parivarthana yoga. This native’s nature is guided by Kuladevatha Narasimha Swamy (Occupant Mars) and mind is controlled by “Bhairavi” (A devata Shakthi. Jupiter is controlled by “Varahi” (A devata Shakthi) 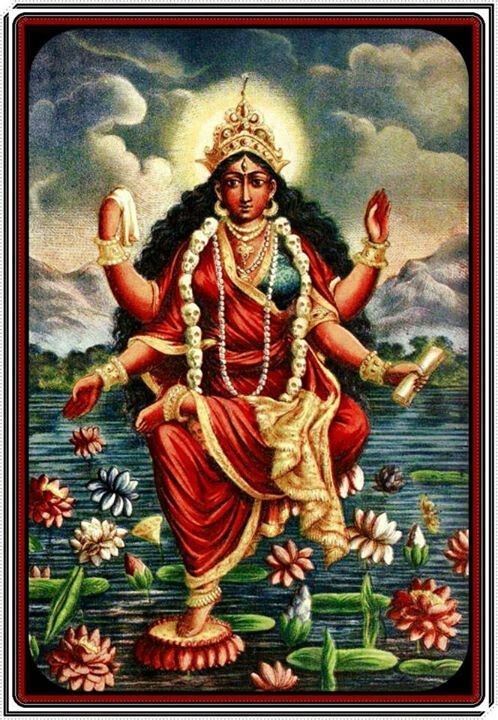 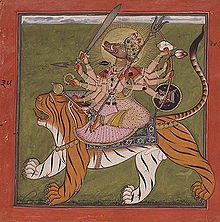 32. His strength is indomitable intelligence (Signified by exalted Mercury in Lagna)

33. His weakness is he doesn’t remember anything, don’t like to work (Signified by Mercury’s placement in bhava chart)

34. If anything is an emergency, then he will wage a war for getting the work done (Signified by Mars presence along with Moon- mind)

As the D-24 Jupiter is posited in the 8th house the native got learning of Astrology. However, as always he could not able to learn it due to Jupiter is showing significance of the 12th of its place in Bhava chart. Even Mercury is showing the same phenomena that can be seen when we compare Siddhamsa and its Bhava Chart. Mercury’s position signify that he will pursue spiritual pursuits throughout his life.

Ketu’s presence in the 4th house of D-1 might have triggered the event.

D-24 Ketu during the above highlighted time is aspecting Taurus and the lord of Taurus is placed in Aquarius. Hence confirmed.

Native children are very good signified by Jupiter’s placement in the 5th house. Lagna & 6th lord position in the 2nd house signifies that the growth of the native is stagnant that is true. Sun’s, Moon’s placement in the 11th house signify the parents, Mercury’s debilitation show that the native’s intelligence will be overshadowed by his aggressiveness, that is also signified by Mars’s aspect over the debilitated planet. Chart confirmed. 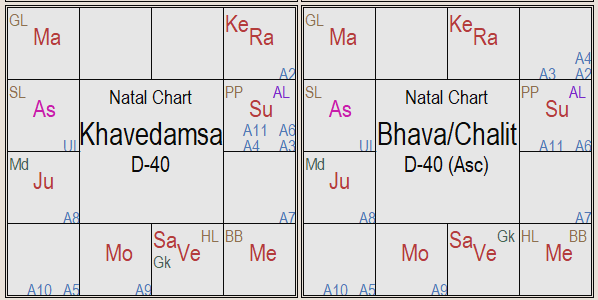 D-40 shows all maternal legacy. Grand Mother gave her milk to the native. Lagna lord Saturn is exalted and with the 4th house lord i.e., Venus. So a direct correlation can be established. Lagna lord is in the 9th house hence it is yoga karaka. Venus also became yoga karaka due to the ownership of the 4th and 9th houses. Apart from this Saturn in this Varga chakra is a Matru Karaka. Hence perfectly confirmed.

D-45 shows all paternal legacy. Father is younger than all. Elder to father is mother-in-law (76). Two elder brothers to his father. 1st elder brother died of accident (Apr-May 1991). Another elder brother is still living who is above 80. Grandfather died @80+ due to cardiac arrest. Grand Mother died in 1994. She has knee pains and ulcers. 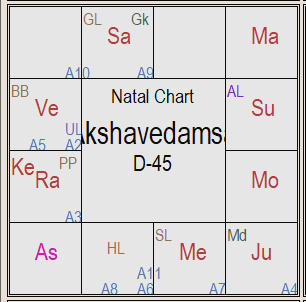 Father got political power due to the parivarthana yoga between Sun and Moon and native. For the want of certain other details, all the data given is not valid to rectify D-45. Hence possibly I have confirmed only the father’s main profession only.

(I predict with my limited intelligence and from the knowledge that I learned. Please remember that no astrologer is 100% correct or 100% wrong)

previous
Role of remedies in astrology?
next
Kanakadhara Stotram